I can’t get enough of Sam Baker’s new album, “Say Grace.” It has the spreading wings of autumn that I live beneath these days. Not sure if I’m huddled here to keep out of the rain, or if they’re suffocating me. Such a dark place to be, but warm and safe. I’m numbing myself from the inside out, to deflect whatever else comes about this year. Wont’t be caught by surprise Again.

There are some things that can be guarded against, where others slip out of our control. I can throw myself back into writing the novel, get into that mindset of twisted fairytales and thickly clustered brambles; the nightly runs to the quarry under a bone-blood moon, and blue roses growing on the graves of those loved ones who leave behind living souls in torment. Blue roses speak for eternity, keep that desolate feeling of the Only One, alive… Blessing and curse, high on thorns and strung up in blood, in a gorgeous sky.

I’m so tired inside, and at the same time very much awake. Dark times at work, darker days, as the year dials down. This is the time of the suicide. Precursor to a festive season when lights strangle the thoughts of those in no mood to celebrate.
The wind is keening outside, and my soul echoes it today. It’ll pass, like it always does.

I don’t mean to be rude. To be cold, savage, bitter and sweet all at once. It’s my panhandle winter, come early. It’s how I’m made, what I turn into, and the beautiful brutality of it is, I can’t even say it’s something I like or control.

A warm heart, a warm house, not a wind-burned prairie farmhouse; good whisky, and the smile of a friend.

It’s not self-pity, so much as self-rage. A low burning, sullen thing inside, not wanting to become bitter as the wind outside. It’s about seeing my now-ex partner of five years disappear off my horizon for months on end, maybe years, given what our lifestyles are like. It keens through me like that once-was blade. We don’t realize what we have until it’s gone. The love left a while back, but he’s a constant presence in my life; a ready pair of arms for an embrace after a poxy day at work, like today. He’s kindness, effortless, despite my shitty attitude; and a grey complacency I always promised myself I wouldn’t fall into.

Promises are mundane things, especially made to the self.

He’s torn my soul ragged in his own way, especially at the start. We didn’t know each other until 18 months had passed and we’d begun living together, and then … It’s the presence in the room, the ready humour, the consistency. It’s becoming accustomed to these things, after years of being alone, out of preference and necessity and isolation.

It’s trying to concentrate, and hearing every tic, every breath, every thought. It’s finding ways to become angry for no reason, irritable. It’s hating yourself, and him, and the world, for not putting things in the right order that you once thought they should fall into. Marriage was never on the cards, nor kids… And I find myself looking into the new-coin faces of the latter these days, and knowing a bullet hole in my chest where none existed before. What might have been, for what could still be, if I got my shit together and my body didn’t clap out on me too soon.

No. I’m a writer, not a mother. A traveler, not caught in the reins of any one place for long; not trapped in the eyes and heart of another, who might just make these things so much more appealing, and hold me still, and know the nightmares that keep me awake and in need of the night to walk in, the rum to drown in.
No one needs that kind of shit, on either side.
So says my head. My heart begs to differ.

I’m a girl and child and woman and ex-lover and friend, a writer and a daemon and so much more besides. Such a feeling of Self these days, it frightens the hell out of me. So much more aware. So wryly ironic with it, laughing in my own face, cutting my lip with these teeth. Hating the changed figure, while embracing it as something novel, independent; the final evolution of my body, perhaps to keep it alive a bit longer than was expected.
Hating distance more than anything in my life, except perhaps my reactions to it. Silence. Changing moods with leaves. Whoever heard of a writer without words, without meaning, because it got lost en route around fear of Self?
Well. Just about everyone. Get over yourself, girl.

Letting go is easier than clinging on tight.
So my head tells me.

My heart begs to differ.

The year will end. We’ll sing Auld Lang Syne, and dance on the rocking tables to Fairytale of New York, and things will be put right over a midnight whisky. And I’ll find a peace in turning my face to the new year, the new raw wind that chafes off the old skin, sets my eyes watering to clear them of old dreams. I look forward to new beginnings in the same way that picking up a new pen and setting it to a fresh page, is cauterizing.

In the meantime, I abide, and listen, and huddle up with my back to that acorn-bitter wind, and love my friends and miss the ones gone, and find ways to keep warm. And watch the horizon, because you just never know.

Oh this is passing, is all that she said. 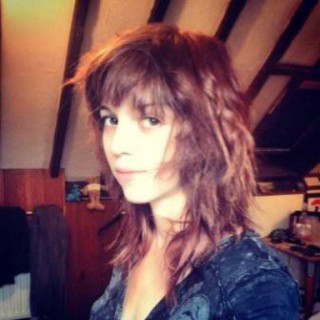